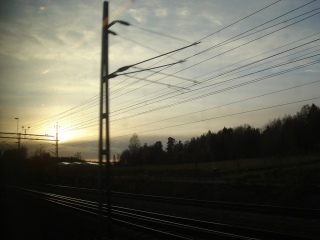 Up above it all

In my high school years I went to more camps then Yogi Bear in search of a picnic basket. These were not just camp grounds with smelly toilets and tents though, these were camp grounds with high ropes courses, mountain biking, giant swings, lakes and a ton of other fun activities. It was a paradise for me to test my limits and face my fears head on. I only had a few fears in my teenage years: The fear of not impressing the lady folk, the fear of accepting a dare that I really shouldn’t have and the fear of heights. Of all of those fears, the last one could stop me in my tracks. I didn’t become an ice cube of fear or anything, but I had an extremely difficult time getting past the fact that I could fall to my death at any second. I was not the kind of kid to pass up an awesome opportunity though. If I did, I knew I would regret it for a very long time. So instead of saying no, I said yes. Even if it freaked me out.
I woke up in my bunk to the smell of Axe body spray and lots of B.O. Another day at camp had begun and I was excited to try everything that I could that day. So I showered, got dressed and was out the front door of our groups cabin. I was greeted by very pleasant morning weather that was crisp, clear and just the right temperature. We started the day off with an epic meal and a show in the camps main dining hall, after which we promptly went mountain biking. The trails were mainly sand, uphill and by that point in the day the sun had come out to beat its rays upon us like Arnold Schwarzenegger destroying his rival robotic foe. I tried going up the sand hill, on a bike, in the sun, while drenched in sweat. It was fun for all of two seconds and then my legs came to the sad conclusion that I was out of shape and shouted, “No more!”. So, I walked the bike up the hill in my defeated state. Defeat sucked, but I finished the course. I thought that surely I would be to worn out to do any other activity that day. It was lunch time by the time we finished the course, so my legs got to rest for a little while. I recharged myself with food like a video game hero grabs a power-up and was ready to go again.

After lunch was over, I excitedly asked our group leader what was our next activity. He gave us a few options, one of which was high ropes. All wide eyed and bushy tailed, I said that I wanted to go on the high ropes course. So, off we walked around the man made lake that was the focal point of the camp. After our hike was over we reached the inside of some woods just off the cusp of the lake. I could see steel wires strung all about, but was not sure which of the two courses I would go on. The courses were set up parallel with each other so two people could go on the course side by side and encourage each other along the way. I got all settled into my very uncomfortably tight harness and was given a set of crab claws. No, the crab claws are not something you eat, they are your life line that keeps you attached to the course forty feet in the air.

I ended up going on the left hand side of the course which had nearly the same obstacles as the right hand side. The first obstacle was a set of logs that you had to walk across to get to the first elevated platform. It was a piece of cake besides them being shaky.  Cool, I was already one sixth of the way done with the course! I was officially Spider-man in my eyes. Awesome Spider-man, now let’s conquer the next obstacle, a set of swings. Essentially you could hold onto the ropes on both sides, swing just like a regular swing set and step to the next swing until you get to the other side. No big deal! Then the next obstacle looked exciting. There were two ropes strung high and low on both sides of the obstacle that cross in the middle to look like an X. You have to use that rope to steady yourself as you walk across a thin metal wire. I thought, “Great! This shouldn’t be to difficult.”. Well, just as I am about to take my first step onto the wire, I hear something hit my helmet. Mind you, this high ropes course is in some dense woods, so it is possible that some bird decided to have a bad day on my helmet. Sadly, that was not the case.

What I had felt was a drop of rain. At this point in the course, I was not allowed to turn back, so I had to cross that wire. There was just one…no, two big problems. What typically comes with rain? If you guessed lightning, you would be spot on. At this point I was officially freaking out. I am standing on a wet wire, which makes it slick, in the rain, with lightning in the distance. Essentially I am a part of a really large lightning rod saying, “OH OH Hit me! Hit me!”. It obviously couldn’t get worse right? Wrong. I am about a third of the way across the obstacle when I take another step and my foot slips. Remember those crab claws that made you hungry earlier? Well see, funny story. They are designed to be adjustable to different heights so that you can have a little more freedom in your harness if they are loose. The disadvantage of having them loose? You fall farther when you do fall.

I fell three feet below the wire. Three feet may not seem like a lot, but when you are a burly kid with little arm strength and can just barely reach the wire above your head, it is not a fun place to be in. So now, I am wondering to myself how in the world I am going to get out of this. So, being the smart kid I was, I asked one of the course directors whether they could come out there and pull me up onto the line again. That was a big ol’ nope. The lines on the course were only designed for one person to go across each obstacle at a time. Now I REALLY had to do this on my own. So, I flail my arm upwards and get a hold of the steel line with my finger tips. I pull as hard as I can until I can get my other hand on. I get so far as putting one foot up on the wire and then slip off again. The best part is that at this point, it was no longer raining, it was dumping buckets of water. The lines were as slippery as they could get and here I am hanging under it feeling defeated after almost getting back up. I try again and fail. At this point, anyone who climbs can tell you that finger strength is important for grip. My finger strength was gone, but I had to get up. I gave myself a pep talk and had people from the ground yelling encouragement that gave me the strength for one last hail marry attempt to get back on the line. I flung my hand upwards, grasped as tight as I could and pulled myself up. I did it! I got back on the line! I took a breather since I was no longer being strangled by my harness while dangling in the air. Then I took a few more steps across the wire. The unthinkable happened.

I had forgotten that once I got back on the wire, it would have been a good idea to shorten my crab claws so that I didn’t fall so far the next time. Well, that was a nice thought once I was staring at the underside of the wire I had grown to dislike very much. After I fell this time, I sat there in my harness and wept. Raindrops mixed with my tears and I felt like I was finished. I was overexerted under a slick steel wire and in the thunderstorm. I was ready to give up, but I knew that that was not a possibility. I had to press on. I had to finish this course not only for my safety, but for my desire to succeed. I dangled there for a little bit knowing that if I just tried to go for the wire with a halfhearted effort, I would surely fall off again. So I sat in my harness and regained a little strength and heaved myself up on the line and was beyond relieved when I reached the next platform. I finished the course by jumping off a platform into nothingness. It is a forty foot drop that you have to commit to, but I did it in a heartbeat just to get off the course.

Are you on the wire?

Do you ever feel like you are walking on the wire, the wind is blowing, it is raining and lightning is lighting up the air around you? Okay, maybe not that exact feeling, but you get the point. Sometimes we are in a place that is really uncomfortable. Sometimes we are dangling there thinking to ourselves, “How did I get into this mess?”. Sometimes we do this intentionally, but other times it is small steps that lead to big consequences. In either instance though, we need to trust God that he will catch us. We need to see God as our set of crab claws. He WILL let us fall a little, but ultimately He will give us the strength to get back up.

How many times will you fall?

I reflect on my faith journey often and when I do, I think about the times I have fallen to temptation. I fall, but God catches me. Every time, without fail. This is invaluable!! Now I want to clarify something, this does not mean that we should jump into the abyss every chance and expect God to catch us just because He loves us. That is called being a carnal Christian. I personally want to live a life where God walks side by side with me on the course of life and leads me to overcome the obstacles in my way. I want to be able to come to Him after walking the straight and narrow path only to have Him tell me, “Well done.”.

Trust God and make the jump at the end of the course! Stop standing on the edge wondering if going back is a better option. He will be there at the bottom waiting for you. Love Him, get to know Him and don’t be afraid to share your story of how you jumped of the edge and trusted Him to catch you!