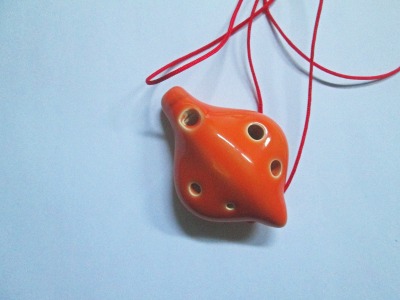 I was told a few years ago that I am one of the most eclectic people this person had ever met. I had to look up what the word meant, but after doing so it gave me a sense of accomplishment. The reason this guy told me that I was really eclectic was because I carried around an instrument that very seldom is recognized. The instrument is called an ocarina. It is a wind instrument that is made of ceramic. The ocarina is a very strange instrument to hold and play because it is not conventionally shaped. I own what is called a, “potato ocarina”. This is because it is literally shaped like a potato. The ocarina was just small enough that it fit into my backpack so I could carry it everywhere I went. I didn’t have to worry about it breaking because of its design and shape.
When playing the ocarina, you have to contort your hands in a very strange way in order to cover the air holes properly while also holding it in place on your lips. It took about three hours for me to learn a very simple song on it when I first got it. I felt as though I was a master of that particular song, so I moved on to another song. While practicing the second song, I started to notice that it was getting difficult to play the instrument. This was not because my fingers were cramping up, even though they were, but because as I played each high note my skull vibrated with the frequency of the note.
There is a very scientific reason as to why my head hurt, but I won’t bore you with super scientific jargon. Each and every object that exists in the universe has what is called a resonant frequency. This means that when that frequency is duplicated by some other external force, the object starts to vibrate violently. In my case, a few notes on the ocarina match the resonant frequency of my skull, hence why it is so uncomfortable for me to play the ocarina.

Are you resonating with God or are you playing your own tune?

Playing your own tune

Many times I have fallen into this trap of thinking that it is okay to do my own thing. God will be okay with me doing this or that….right? So often we skirt the line of what we think will be, “okay” in the eyes of God and end up getting hurt because of it. You see when we choose to play our own tune, we are ignoring the music sheet (the Bible) that has been put in front of our faces.

Is having the resonate frequency of your skull being matched very uncomfortable, yes it is. Does it maybe even hurt? Yeah a little bit, but just like our own lives, I would much rather be in tune with God than out of tune with His commands. Being able to stay in tune with God is more then just being on the same music page as He is, it is playing note for note what He tells us to. It may be a little uncomfortable, but it is worth it.
So next time you feel your skull vibrating from a specific tone, remember that we need to resonate with what God designed for, not play our own tune.